“Did you know that there is no global warming”

“Did You Know That There Is No Global Warming. It Does Not Exist,”

Says a narrating voice in a video published by wakeup867 on Tik Tok on 28 August. It adds: “I know this might seem quite odd and unbelievable, but it’s a fact.”

Such false messages about climate change as these, advocating for truthfulness are easy to come across. Over the past two decades, there have been many similar propositions like this – from a falsified 1970s first page of Time magazine, announcing an upcoming global cooling, the conspiracy theory about HAARP – a device, through which the “new world order” artificially instigates catastrophic natural disasters, to a statement of Earth’s natural temperature cycles, which refute humanity’s negative influence over the climate. 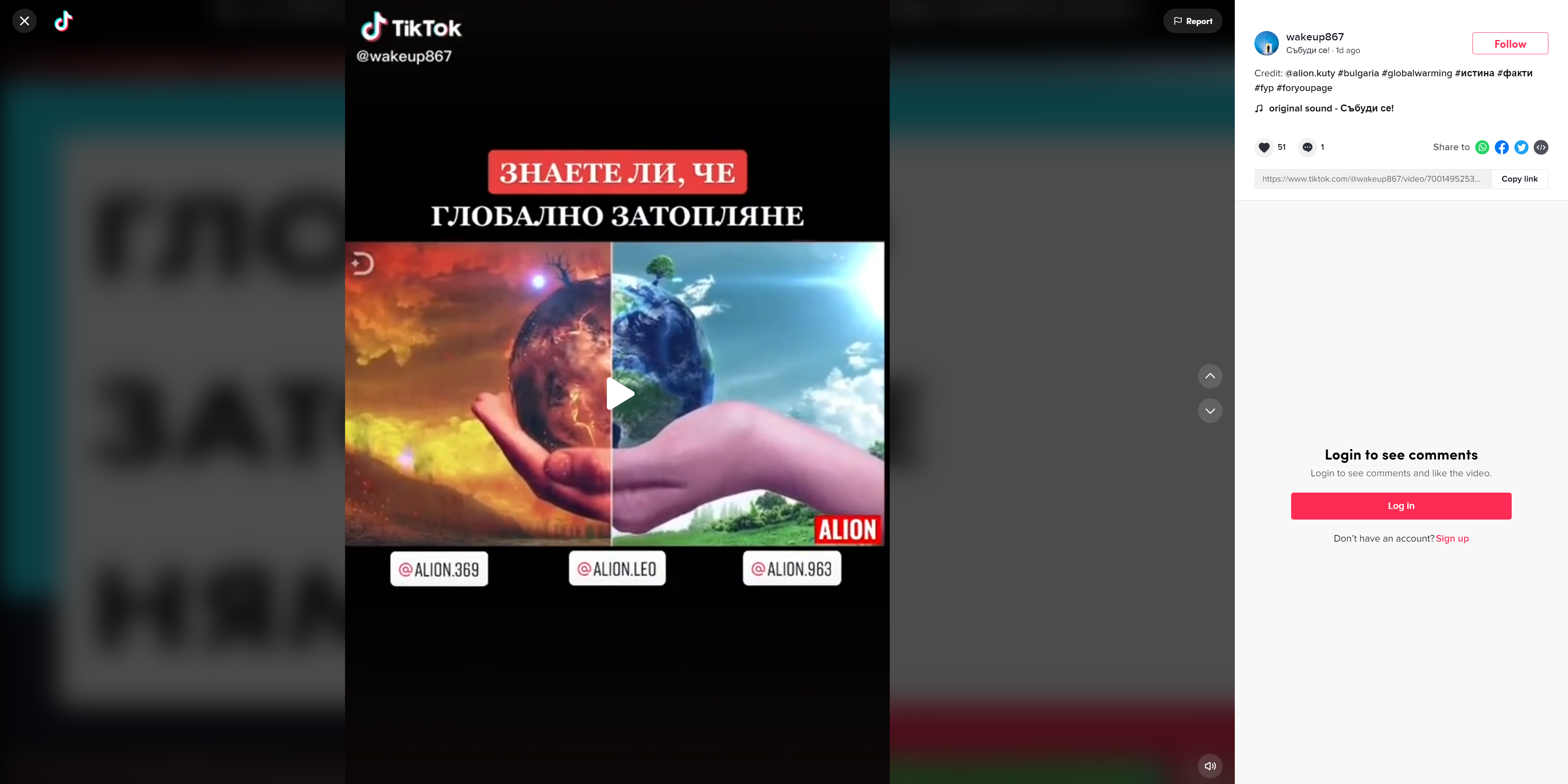 UN’s document is so far the most comprehensive report, concerning climate change. The Intergovernmental Panel on Climate Change, established in 1988, analyzed over 14 000 scientific developments. 234 authors from 66 countries participated in the research. Some of the most fundamental conclusions are:

The report states that global warming is worsening faster than expected. “What’s new is that it unequivocally points to the human race’s actions as the reason behind climate change,” said to Factcheck.bg the meteorologist Paulina Vylchanova, who has over 30 years of experience in aviation meteorology. She adds the climate change occurs slowly, but once it does, it will continue for hundreds or thousands of years. That is also the reason why the UN’s report announced code red for threat.

“Scientists find a tight connection between global warming and extreme heat, drought, precipitation, tornados and an increased number of tropical cyclones,” Vylchanova also stated. These events are the result of Earth’s increased average temperature, which led to “an increased drought by 2.4, rainfalls by 1.5, it decreased snowfall with 5% and intensified powerful tropical cyclones with 10%.”

The meteorologist points out that scientist predict an increase of temperatures by 1.5 C for the next 20 years. “The report says that there is a chance for this increase to be prevented, if we take drastic and imminent action,” Vylchanova adds.

Whose fault is it?

Not only was there no climate change, according to wakeup867’s Tik Tok video, “The idea of global warming comes from globalists and democrats, who pretend to care for Earth and nature. They blame people of polluting the environment, when actually it is them and their gigantic companies who pollute it, including the private jets they fly around with.”

The Non-governmental organization Grove also wrote on the topic. The title “Who’s responsible – the common man or the big companies?” encapsulates the two statements, which actually don’t refute global warming. Some of their supporters are Justine Toms and Apostle Dyankov from the unofficial civil group AC Anonymous.

According to Toms, who is a social entrepreneur and marketer, “The secret of success” is in the small steps – the decisions everyone makes on a daily basis and the habits that they create. According to Dyankov (member of conservationist organization WWF), civil action is incredibly insufficient even if everyone mobilized, because the main polluters are businesses, and businesses are the ones to take precautions, even if change isn’t the most convenient outlook for them.

The WWF’s chief expert also says that in the 1960s and 1970s some of the best climate scientists were hired by none other than the big petrol companies like Exxon. “The energy crisis in the 1970s allowed for a perfect opportunity for these companies to start transforming, but they didn’t take it. Instead, they began a purposeful campaign, with which to assign responsibility on climate change and other ecological problems to their users’ individual choices,” added Dyankov with supporting arguments by Michael Mann’s book The New Climate War.

“Before, it was a global cooling“

1970s titles by Western publications about scientists’ decade-old predictions for an upcoming global cooling keep spreading as evidence even now. Bulgarian online media users include comments about UN’s new report from August with titles from the past.

Some of them are still available and a 2013 publication by Time explains the meaning behind them: “The reality is that scientists in the 1970s have just began to fathom how changes in climate and aerosol pollution can affect global temperatures.” According to the publication, these stories, published in the archives, found new life on the Internet and have been used by the so-called “climate skeptics” (climate change refuters).

Time takes a side in 2013, due to a case of a falsified cover of the magazine, which became popular on the Internet. It is claimed that in 1977 Time published the cover page How To Survive The Coming Ice Age. Time wrote that they never published such a story, but that the original title from 2007 The Global Warming Survival Guide was altered with Photoshop.

There is another cover page from the magazine, which is still being used as an argument by misinformers that scientists can’t be trusted, since before they expected a cooling, but now they predict increase of temperatures. In December, 1973, Time published the cover page The Big Freeze, for which it is claimed that we should expect a new ice age and future drop of temperatures. In reality, though, Time discussed the fuel and energy source crises that President Richard Nixon’s administration was tackling with, it didn’t discuss climate change. 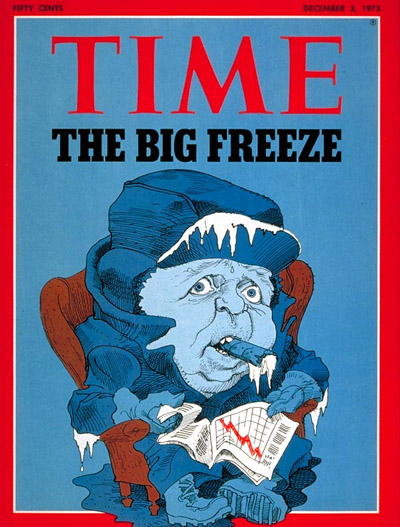 “However, as John Cook emphasized in Skeptical Science, global cooling was the media’s invention, rather than a real scientific warning. Research done by eminent scientific articles published between 1965 and 1979 showed that most of the studies of that time predicted that Earth will warm up together with the increase of CO2 levels – which is what happened,” Time wrote in 2013.

Another Tik Tok video by wakeup867 shows scenes from last summer’s disaster in Turkey under the title “Floods, Caused By HAARP”. Climate phenomena, which were rare or highly uncommon for certain territories before, started getting more frequent, for which scientists have been warning us for decades.

Regardless, one of the most wide-known conspiracy theories is about a device called HAARP controlled by the “new world order” (whatever that means), which can change the climate significantly and cause disasters.

“The influence over the weather is a tempting topic. They say that whoever controls time, controls the world. Often, the turning point in battles and even wars occurred due to bad weather or “harsh” coldness. HAARP is a technology from the 1950s that relies on the atmosphere’s high-frequency impact in a restricted area (above Alaska) and with altitude over 80km (in the ionosphere). The goal was improvement of communications and observations. At the moment, the program is inactive, but it continues to be an interesting topic for conspiracy theories,” meteorologist Paulina Vylchanova said for Factcheck.bg. 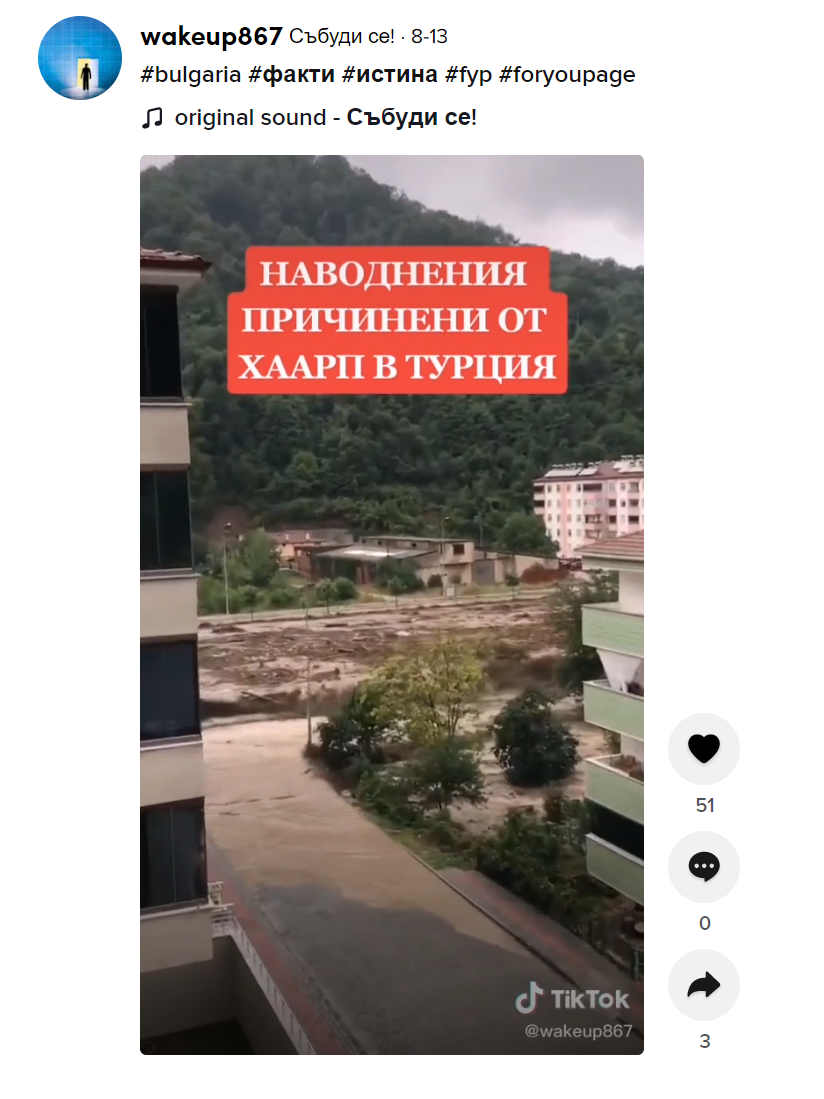 Another extremely popular theory, which has also been shared as comments in social media under excerpts of UN’s report, goes along the lines of that natural earth cycles increase temperatures, not human activity.

“Cycles exist in nature. They have been subject to examination from ancient times. Thanks to the axis rotation of Earth and the Moon around the Sun, we can calculate time by years, months, hours, etc. The 11 year long cycles of the Sun, which astronomers have determined by the number of sunspots on the surface of the Sun, have long been discovered. Science studies the cyclic recurrence, using different methods (for example, iceberg probing or research of tree trunks’ annual growth rings). We can say that cycle recurrence exists, just as we can say that man is responsible for Earth’s temperature rise,” meteorologist Paulina Vylchanova explains. She stresses: “We shouldn’t be divided based on opinion; we should be responsible. We can’t keep acting as if we have three other planets left to inhabit. Action is crucial!”.

Is it a question of opinion?

No matter how exaggerated one side or the other is, it leads to voiced down scientists and facts that are meaningless for society.

“Exaggeration undermines trust in well-founded data: in this case, data showing that climate change is real, that it is mainly caused by greenhouse emissions due to human activity like burning of fossil fuels, but that taking timely, large-scale measures will cost less, than waiting for unacceptable changes in climate. Exaggeration, when it is uncovered, changes people’s stance on the whole problem,” authors Hans Rosling, Ola Rosling and Anna Rosling Rönnlund wrote in their book Factfulness.

In his book “Post truth”, Lee Mcintyre accentuates on media’s inclinations to search two different (opposing) viewpoints at all costs: “The media is well-trained to automatically give ‘both sides of the story’ for every ‘disputable’ scientific matter. Because of that, society is left perplexed.”

No, HAARP has not caused the floods in Karlovo region

„Out of NATO, Putin will protect us!“