On November 29, 2022, a text appeared on the pogled.info website with the title In preparation for a military confrontation with Russia. Leonid Savin was assigned as the author. The post introduces the topic of the European Commission’s (EC) recently presented Military Mobility 2.0 action plan and suggests that the main purpose of this document is to prepare for a future military confrontation with Russia. The text also mentions France’s national defense strategy, which is also set in the misleading context of a planned military clash with Russia. 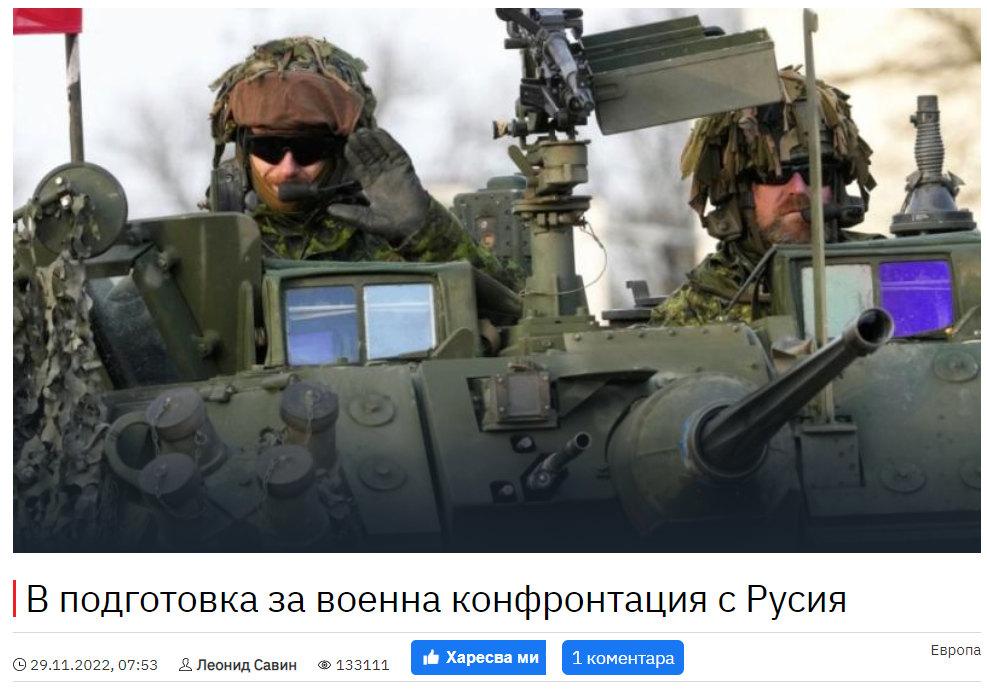 An absolutely identical text appeared on December 2, 2022, in several other Bulgarian web pages – spisaniezora.com, thesofiatimes.com, vestnikutro.com, informiran.net, vestnikzora.com. Most of them indicate their own site as the author with the exception of informiran.net where the indicated author of the article is Vladimir Alekseev.

The text from pogled.info and other Bulgarian sites is a translation of the Russian text by Leonid Savin, which appeared in the electronic edition of the Fund of Strategic Culture on November 28, 2022.

An almost identical article by the same author – Leonid Savin, but a little more detailed and with different title – EU: course towards militarization (from Russian: ЕС: Курс на милитаризацию), appeared on the Russian website geopolitika.ru on December 2, 2022.

According to information on the site geopolitika.ru, Savin is an analyst of geopolitics, the editor-in-chief of geopolitika.ru since 2008 and a member of a military-scientific society of the Ministry of Defense of Russia. Savin’s text on the EU was also published in Spanish and Portuguese on geopolitika.ru, on December 9 and 26, 2022, respectively.

The implication created by these texts is that all mechanisms, projects and documents are somehow related to EU’s plans for a future military conflict with Russia.

What is the EU Military Mobility Action Plan?

The topic of military mobility was important for the EU long before the start of the war in Ukraine, as Leonid Savin’s text tries to impose.

Military mobility is also one of the main join objectives in the EU-NATO joint declaration of July 2016.

In November 2017, the EC announced that facilitating the movement of live and non-live military forces is necessary for the security of European citizens and for building a more effective and united Union.

The improvement of military mobility in the EU is becoming one of the main goals of PESCO, officially launched in December 2017 with the participation of 25 member countries (excluding Denmark and Malta).

Permanent structured cooperation in the field of defense and security policies was introduced as a concept for the first time in the Treaty of Lisbon. It envisages the possibility for EU member states to cooperate more closely in the field of security and defense. The aim is to allow willing and able countries to jointly develop their defense capabilities, invest in common projects and improve the operational readiness and contribution of their armed forces.

All this led to the creation of the Military Mobility Action Plan by the EC in 2018, which is presented as a series of operational measures to overcome the physical, procedural and legal obstacles to military mobility in the EU. The topics of defense and cyber security are also present in the address of the then President of the ES, Jean-Claude Juncker, to the European Parliament in September 2017.

The Russian invasion of Ukraine in February 2022 triggered the EC to review the Military Mobility Action Plan. This is how the updated version Military Mobility 2.0 appeared. It was published on November 10, 2022. At the same time, the EU’s policy on cyber defense was also published.

The revision of the military mobility plan and the publication of a cyber defense policy is justified by the EC with “the deteriorating security environment following Russia’s aggression against Ukraine and to boost the EU’s capacity to protect its citizens and infrastructure”. The new action plan has a deadline until 2026 and focuses on building an effective military mobility network in the EU.

The plan also pays attention to the partnership with other organizations, unions and individual states for the implementation of the set goals. Cooperation between the EU and NATO in the field of security and defense is being strengthened. Joint actions on building a military mobility network of EU countries with regional partners are also encouraged. Special attention is paid to Ukraine, Moldova and the Western Balkans. Canada, Norway and the US are also part of the Military Mobility Plan since 2021.

On November 15, 2022, the Council of the EU adopted a decision confirming that UK’s participation in the Military Mobility Plan meets the general conditions, after the UK expressed its wish to join.

The plan explicitly emphasizes that all actions of member states must be consistent with and not contradict their national legislations and national defense strategies.

The Military Mobility 2.0 action plan is not the EU’s preparation for war with Russia, as claimed in Savin’s widely shared article, but rather the Union’s response to Russian aggression in Ukraine, which seeks unity and security cooperation and defense.

Cyber security and cyber defense in the EU

The topic of cyber security has been on the EU agenda long before Russia invaded Ukraine. In 2016, the Network and Information Security Directive (NIS – EU 2016/1148) was adopted, which was the first attempt to build common European legislation in the field of cyber security.

In December 2020, the EC proposed and update in the directive. It has been revised so that its content meets modern challenges in cyberspace. The new version NIS2 (EU 2022/2555) was approved by the European Parliament and published in the Official Journal of the European Union in December 2022.

Meanwhile, on November 10, 2022, together with the Military Mobility 2.0 Action Plan, the EC also published a document on cyber defense policy for the creation of a joint strategy of EU countries. The document describes the dangers the Union is facing in the context of hybrid war.

According to the EC, hybrid threats refer to when, state or non-state, actors seek to exploit the vulnerabilities of the EU to their own advantage by using in a coordinated way a mixture of measures (i.e. diplomatic, military, economic, technological) while remaining below the threshold of formal warfare.

One of the aspects that is emphasized the most is the need for close cooperation between the military and civilian sectors.

Back in 2020, the EU imposed the first sanctions of its kind against cyber attacks. Sanctioned individuals and companies were from North Korea, China and Russia, including Russian military intelligence.

It is misleading to claim that the EU is planning a military confrontation with Russia with its attempts to improve military mobility and the level of cyber security and defense in the Union. Neither the Military Mobility 2.0 Action Plan, nor the EU cyber defense policy, nor the NIS2 hint at EU’s preparations for a military confrontation with Russia. Such statements are part of the Kremlin’s propaganda, which portrays Russia as a victim threatened by the “collective” and “hostile” West.

The European Union is stepping up efforts to improve military mobility: https://ec.europa.eu/commission/presscorner/detail/en/IP_17_4385

The Rewriting of the EU’s Military Strategy: https://finabel.org/the-rewriting-of-the-eus-military-strategy/

A Strategic Compass for a stronger EU security and defence in the next decade: https://www.consilium.europa.eu/en/press/press-releases/2022/03/21/a-strategic-compass-for-a-stronger-eu-security-and-defence-in-the-next-decade/

The Strategic Compass of the European Union: https://www.strategic-compass-european-union.com/

From stricter reporting rules to a new cyber threat hub, the EU is upgrading its cybersecurity law: https://www.weforum.org/agenda/2022/12/cybersecurity-european-union-nis/ 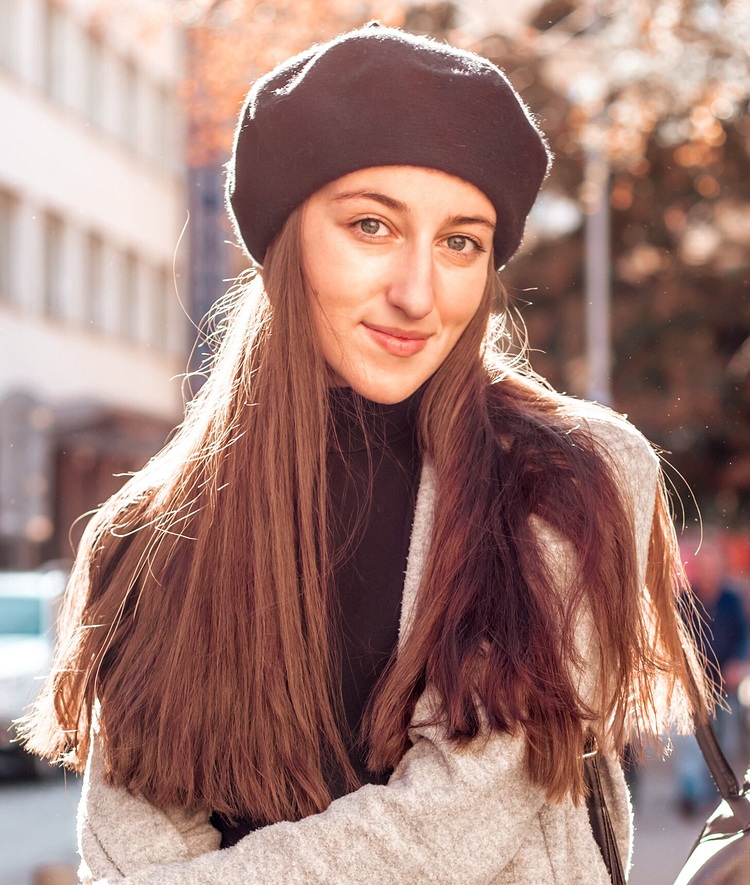 Vanessa Nikolova
Vanessa Nikolova graduated in journalism from the Sofia University "St. Kliment Ohridski". She has worked as an editor and translator in print and online media. She is interested in topics related to the Western Balkans and the Far East, including the denuclearization of the Korean Peninsula. She is passionate about astronomy and astrophysics, and one of her goals as a journalist is to make science more accessible and interesting for the average reader. Works with English, Spanish, Italian, French, Russian, Serbian and Korean languages.